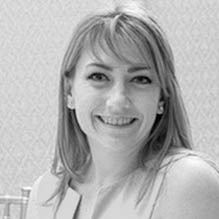 The arts have been always been the focal point of Sarah’s life. She was literally raised in a theatre. Her passion for the arts manifested in the study of many disciplines, and in 2009 she received a BFA from Maine College of Art. Since graduating with a degree in Metalsmithing and Jewelry, Sarah has created a clothing line and consulted with a prominent lingerie company to design a novelty connoisseur line. She also maintains a studio practice in ceramics and pottery and is a founding member of a successful aerial circus group, allowing her to bring to Palmer Westport Group perspective from both sides of the curtain.

With her undergrad thesis work greatly steeped in the concept of ritual, and the study of why people gather, it is no wonder she has found herself working to re-animate these architecturally and historically significant vessels that have provided communities for many generations the ability to come together. In her position as a Palmer Westport consultant, Sarah has presented at the LHAT National Conference in NYC (2014), and worked with many organizations nationwide to inspire transformational community impact. Projects she has worked on in this capacity include The Colonial Theatre, Phoenixville, PA, The Roxian Theatre, McKees Rocks, PA, Jacksonville Center for the Arts, Jacksonville, IL, The Columbia Theatre, Paducah, KY, The Princess Theatre, Decatur, AL, and 8 historic opera houses statewide in Iowa.