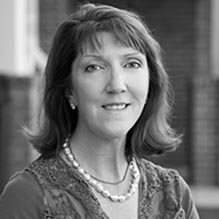 Principal. Susan is the former Executive Director of The Colonial Theatre, Pittsfield, MA, where she led the board/staff team to produce and present programs, raise funds, do long-range planning, and lay the groundwork for a $21,456,002 restoration of the 100-year-old, architecturally-significant historic Colonial Theatre, dark for over half a century, and the 30,000 square foot adjacent annex building. The capital campaign included $6,265,322 in New Market and Historic Tax Credits.

Susan began her tenure with the Colonial in 1998 as a founding board member. She was a co-founder of Barrington Stage Company – a producing theatre company that recently won two Tony awards for The Putnam County Spelling Bee; managing director of The Berkshire Theatre Festival; Information Systems Manager at Jacob’s Pillow Dance Festival; Director of Major Gifts at WGBY Public Television; and General Manager of CompuWorks, a systems integration firm in the Berkshires.

Susan has been on the faculty of Association for Performing Arts Presenters, a national service organization for presenting theaters, and has been a program presenter at the League of Historic American Theaters at their national conferences in Boston, Kansas City, Las Vegas, Los Angeles, Philadelphia, San Diego, and New York City.